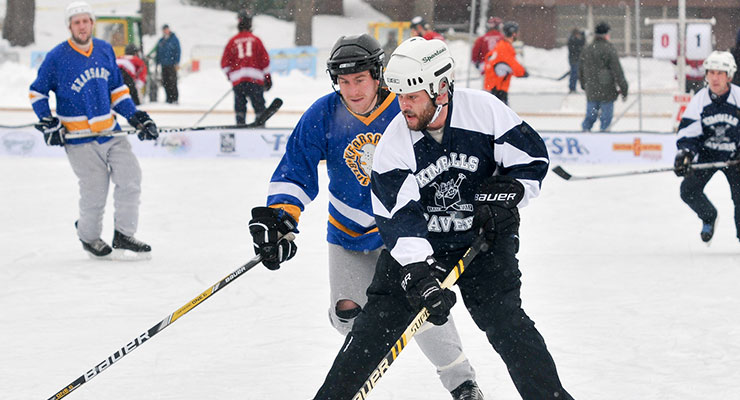 Player’s age will be determined as of the opening day of the tournament.

All players must be completely registered, with ages verified and executed waivers, before entering the rink.  Photo ID’s are required at check-in and will be checked throughout the event.

Only registered players, Black Ice Officials and volunteers will be allowed on the rinks.

Players may only play on one team, and cannot “sub” or play for any other team in the tournament. 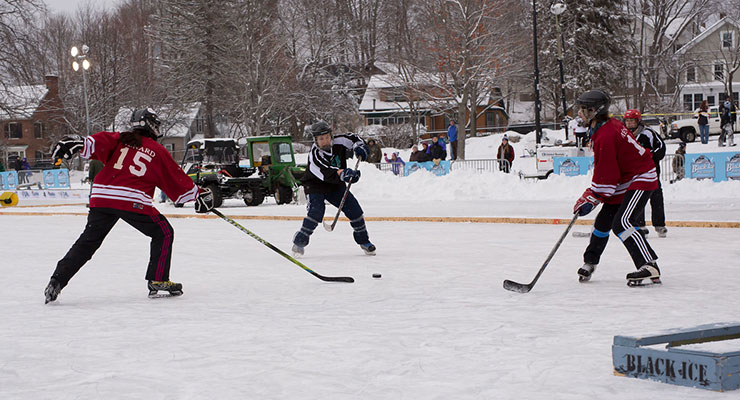 Goalie equipment and goalie sticks are not permitted.

All teams must have matching jerseys.

All teams must have light and dark jerseys.

Games will be played in two 15 minute running time halves. There will be a three minute rest period between halves.

Each team will play 4 games, if schedule allows.

Games played on day 1 and day 2, if tied at the end of the second 15-minute period, will be scored as ties, with no overtime.

A rink side game official (the “Game Monitor”) will be assigned to each game. The Game Monitor will keep track of playing time and goals scored, and when necessary, will make puck possession calls and enforce goaltending and any other rules/policies.  All Game Monitor rulings will be final.

Abuse of Game Monitors, including but not limited to coarse language, disregard of Game Monitor instructions, or threatening behavior will not be tolerated. Abuse of a Game Monitor will result in ejection from the tournament.

Minor penalties, as called by agreement of the players or by the Game Monitor, will result in an immediate stoppage of play and the award of puck possession to the non-offending team.  Minor penalties shall include the following: 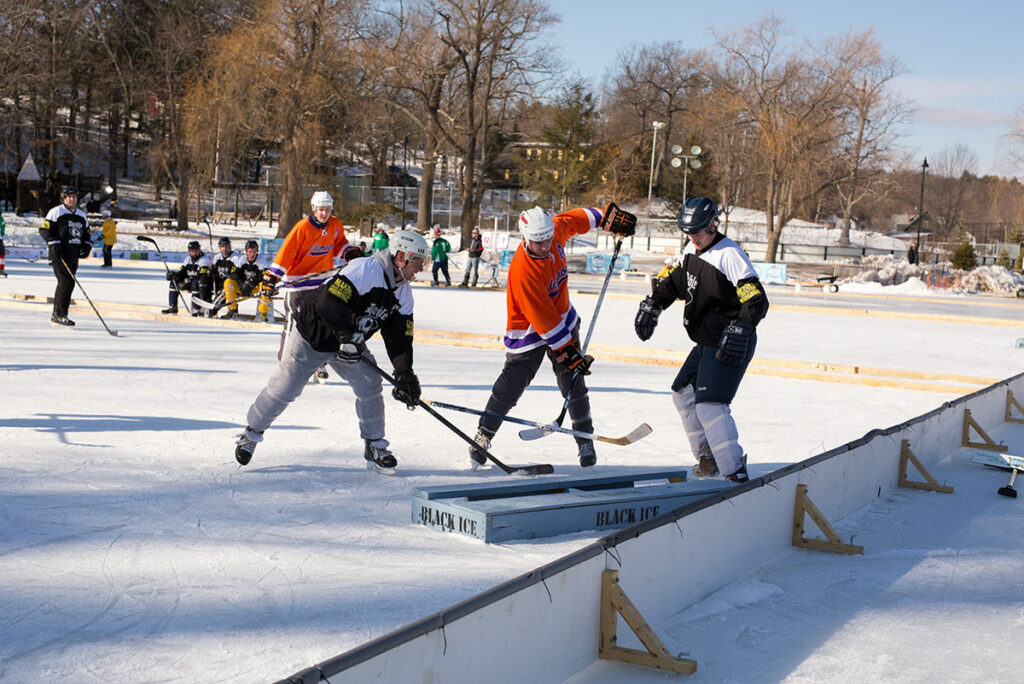 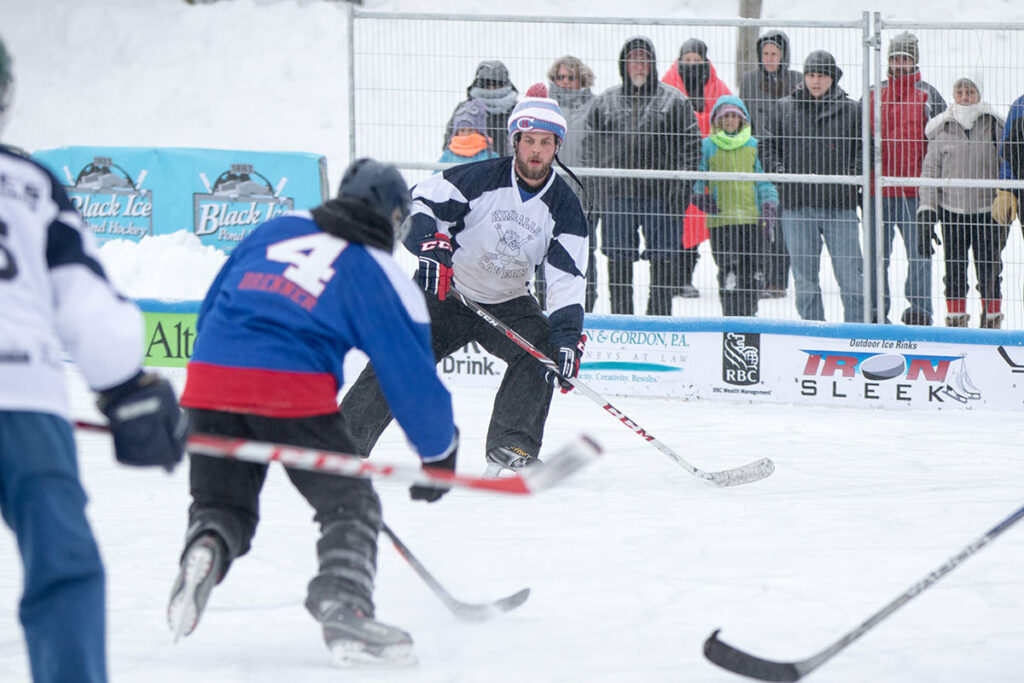 Major penalties, as determined by the Game Monitor, will result in an immediate stoppage of play, the award of puck possession to the non-offending team, and ejection of the offending player from the tournament. Major penalties will include the following conduct, which is strictly prohibited:

A player ejected from the tournament cannot be replaced.

There will be no body checking.

Teams must be ready to play at their designated start times. Play will commence, regardless, at the starting horn.

There will be no offside or icing.

All goals must be scored from the attacking side of center ice. Center ice is marked on the side boards.

Goaltending is not allowed. Players shall not “camp out” or goal tend.  A player shall be deemed to be goaltending if the player is not actively skating and his/her stick or body is within a stick’s length of the goal before the puck is in that same area.  Continued violations of the no-goaltending rule after one warning from the Game Monitor will result in the Game Monitor’s award of a goal to the non-offending team.

If a puck leaves the playing surface, the players (or if necessary, the Game Monitor) shall determine which team touched it last and the other team will be awarded possession of the puck at the point where the puck left the rink. The defending team must allow the restarting player two stick lengths’ clearance upon re-entry.

Because of the different number of teams in each bracket, the number of playoff spots may vary by bracket.  PLAYOFF QUALIFYING CRITERIA FOR EACH BRACKET WILL BE POSTED IN THE PLAYERS’ TENT AND ON THE WEBSITE AT AND AFTER THE OPENING OF THE TOURNAMENT.  CHECK THE MONITORS!  Generally speaking, the team with the most points in each division within a bracket will automatically qualify for the playoffs, with the remaining playoff slot(s) for each bracket filled by “wild card” team(s) with the next most points, and the teams ceded by points for playoff pairings.  The Board’s determinations as to playoff qualifiers, pairings, and the conduct of the playoffs shall be final.

If teams are tied with total points, the following tie-breakers will be used to determine which teams will qualify for the playoffs and/or advance to the next level:

Whichever team won the game played against the team with which it is tied places higher (head to head). If teams tied or did not play, go to Step 2.

If still tied, the team with the least total goals against it places higher.

Team entries will not be processed without full payment.

A player will only be allowed to play for one team in the tournament.

The Board reserves the right to amend these rules. All teams will be informed of any rule changes prior to the start of the tournament.

The Board reserves the right to prohibit any player or team from participating in the tournament if the Board determines, in its sole discretion, that a player or team is acting in an unsafe, irresponsible, or unsportsmanlike manner.

Please note: professional players – a player considered a “pro” either under contract to play, paid a salary, or receiving paid expenses are not eligible to participate in the Black Ice Pond Hockey tournament.  Retired “pros” that have an agreement with a past team will not be considered to be under the “pro” rule. 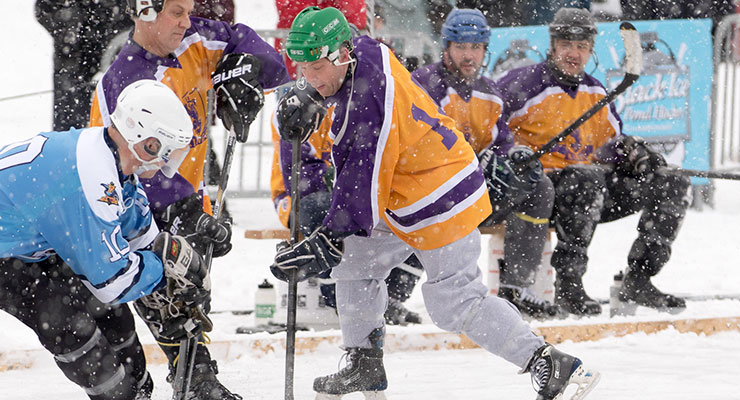 Some of Our Sponsors